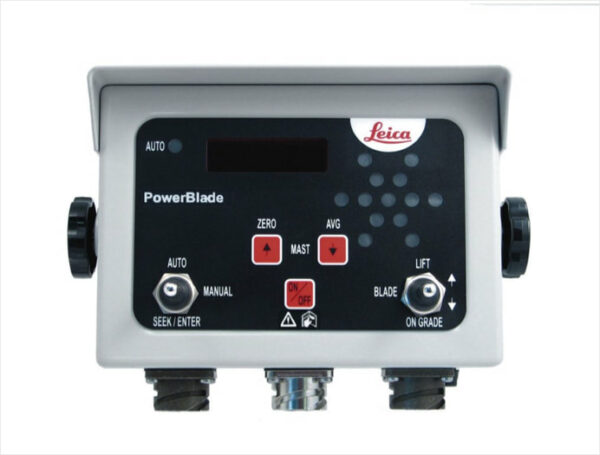 The Leica PowerBlade system is a complete solution steered by the MCP700 control box – easy-to-use and full of features. A choice of laser receivers allows you to tailor the system to your application. An extremely rugged electric mast and a variety of hydraulic options complete the system. All components have been developed to meet the extra strain experienced on dozers and agricultural tractors.

The PowerBlade system features a very rugged and durable design and is up to any challenge:

The system can be mounted on a broad range of machinery such as scrapers, dozers and agricultural tractors, automatically controlling and adjusting the work.

The PowerBlade system offers five different indications of grade position, including directional out-of-beam indicators. This information is shown where you need it – on the control box. Selectable accuracies provide job tolerances from rough grading to final finishing. The control box is water-resistant (IP65) and uses a LED display that can be easily read, even in strong sunlight. Two easy to operate switches let you choose between auto/manual mode and blade raise/lower. The well-laid out design makes the control box both easy-to-use and understand. The system features a lift function allowing the operator to temporarily lift the blade without leaving automatic mode. This feature is especially helpful for coarse grading when great amounts of dirt are moved. The survey function provides height information of a defined area even including an average height function.

This feature makes land leveling a simple task. The small size of the control box makes it easy to integrate into any machine.

The electric mast MPM700 was specifically developed for use in tough and demanding environments. The rugged design and the anti-vibration system of the platform are the ultimate combination against damage in harsh construction environments.

The laser receiver is waterproof (IP68) and uses an LED display that can be easily read, even in strong direct sunlight. The receiver has a 360° capture range, with a measurement window of 190 mm. It features five different indications of grade position. The receiver communicates and is powered via CAN bus from the MCP700.

Software offerings to meet your needs