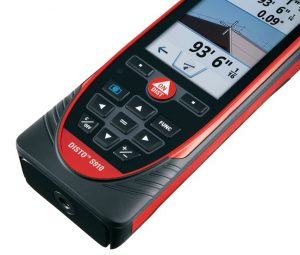 Smart Base — a biaxial pivot integrated with the circuit board — is the key hardware innovation.

Combined with a more powerful laser, a 360° tilt sensor, and new software –Smart Base enables the S910 to measure the distances and angles between multiple points.

For maximum accuracy the SmartBase requires a simple level check. This guarantees the electronic level of the S910 is within ± 0.1° of true level. For the highest measuring accuracy you will want to use a tripod for the majority of P2P, Smart Angle and Smart Area functions.

The S910 includes a metal insert for a ¼” tripod thread, found at the bottom of the SmartBase (and a 5/8” adaptor is available).

Even with a tripod and outdoor pointfinder camera, placing your laser point exactly where you want it can be challenging, especially at longer distances. The FTA 360-S<http://lasers.leica-geosystems.com/global/shop-leica/accessories/fta-360-s> is a micro-adjustable tripod adaptor. Point and shoot to get close, then tweak the knobs ever so slightly to adjust your spot by millimeters.

Product Description
Portable
Weighing under 9 kilograms, Maverick can be both installed and removed by a single individual.
Maverick is easily mounted on…

The Leica DISTO S910 is the first LDM that captures multiple, accurate measurements in three dimensions from a…

Our autumn special on our KOLIDA automatic level.
All servicing and repairs are done in our SABS ISO 9001/2008…

Compliments of the season to you” New Year Special

Compliments of the season to you” New Year Special

The Future of Survey Equipment in Movies and Television October 23, 2019

The Future of Survey Equipment in Movies and Television October 23, 2019